Our day at Food at 52  with James Martin was in two halves.  Our participation was called for in the morning as we were pressed into service as a rag-tag team of commis chefs in the preparation of the first three dishes – which made up our menu for lunch.  James guided and instructed and was only occasionally scathing of our efforts!

In the afternoon, already replete with amazing food, and enjoying a nice drop (or two!) of Sauvignon Blanc, we got to sit back and relax as James prepared a further six dishes while we watched, asked questions, and then struggled despite our already full bellies to taste all his wonderful creations.

Here’s a quick whizz through the wonderful dishes we tasted – hopefully I’ll be able to post some recipes in due course!

Thai crab risotto – This was the first dish we tasted and was definitely one of the stand-out recipes of the day for me.  It has amazing complex & multi-layered flavours in exquisite balance, and despite how much is ‘going on’ in this dish somehow manages to taste crisp and clean and not at all muddled.  James described this as his ‘signature dish’ and I can completely see why – it knocks every risotto I’ve ever tasted into a cocked hat!

Smoked haddock rarebit with confit tomatoes – An unusual twist on a Welsh rarebit, with the cheese-based layer built on top of a lovely naturally smoked haddock fillet.  Served with a confit tomato salad (which will definitely be making it into my culinary repertoire) it’s a lovely dish for an English summer’s day, balancing the clean crisp flavours of the tomatoes with the comforting warmth of smoked fish and grilled cheese.

Warm chocolate mouse with banana ice cream & custard – The freshly made ‘last minute’ banana ice cream is actually the star of this dish for me.  It’s packed with really distinct flavours and heaps of texture.  Perhaps it’s because I’m not that much of a chocoholic – the chocolate pudding is tasty, and gooey in the middle, but very similar to things I’ve had before.  The custard involved a lot of hard work, and is clearly something I should master, but I’m not that much of a custard fan and I’m not convinced it adds that much when you already have the gorgeous banana ice cream. 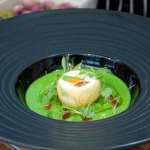 Pea and watercress soup served with a deep-fried egg – This soup is an amazing colour (no Photoshop trickery here!) and has a lovely fresh pea flavour.  I’ll certainly be playing with this soup recipe at home, though I have to admit to being a bit mystified by the soft boiled egg crumbed and deep-fried and served in the centre in a style – I’m afraid – a bit reminiscent of the famous Australian ‘meat pie floater’! It’s a dramatic ‘cheffy’ touch to finish the dish but I’m not entirely convinced it adds anything that a poached egg wouldn’t in terms of flavour (in fact I suspect I’d prefer the latter) and the crispy texture it imparts is duplicated in the streaky bacon garnish.  Think ham and egg with peas, but all taken apart and put back together again!

Lamb with chilli pickle – This is a great little dish, James described it as ‘bar food’ and it would be ideal for nibbles with drinks, but also makes a lovely light lunch or supper dish if you’re looking to impress someone!  Great fresh flavours with a lovely crisp tang from the freshly prepared pickled vegetables, and the lovely tender pink lamb loin is the perfect counterpoint.

Vodka-and-tonic battered cod cheeks with tartare sauce – The batter was an unusual concoction, with the cocktail-cupboard ingredients and made ‘live’ with yeast, quite unlike anything I’ve ever seen before.  It fries up lovely and crisp and keeps the cod cheeks gorgeous and moist.  The freshly made tartare sauce is the first such I’ve ever actually liked!  I don’t batter and deep-fry much, but it looks like a  great party-piece!  I can imagine diving into a big bowl of this with a load of friends around a table, perhaps with some slightly spiced potato wedges.

Seared tuna in spiced apricot marinade with ‘Japanese slaw’ – A beautiful dish to look at on the plate with some lovely flavours – there’s an almost North African vibe with the fruit & spice flavours.  By this stage in the tasting I was really struggling to eat another bite, but was very glad I did.  We don’t often cook fresh tuna at home but I will certainly adapt this marinade next time we do, as it just lifts that slightly bland character it can have while letting the flavour still shine through.

And now for some desert!  We now felt so full we could pop… 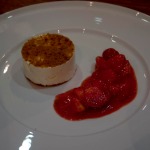 Strawberry vanilla cheesecake – James introduced us to this dish, which is one that he developed for Thomas Cook‘s refreshed airline menu.  This is a wonderful quick simple & impressive little desert which you can imagine being able to adapt almost infinitely with different fruits in season and flavours in the cheesecake mix & biscuit crumb.  I particularly liked that this wasn’t an over-sweet dish, letting the flavours of the fresh English strawberries and the slightly acid-note from the cheese shine through.  It isn’t at all cloying and has an almost palate-cleansing quality, nice and fresh – just the thing when you’d eaten quite as much as we had!  All in all a great little dish and definitely another one for the repertoire! 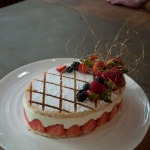 Last, but quite definitely not least, James’ rather marvellously named Bullshit (or “Cheat’s”, for polite company!) Gateaux seems quite the work of patissier’s art.  Just look at it!  In fact it’s startlingly simple – well, for the most part! There’s a story behind this cake – and the name – which I hope to share with you soon..!

For the time being here’s a little snapshot of the man himself doing some of his famous sugar-craft! 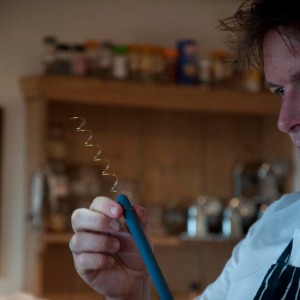 I hope this has really whetted your appetite for more details of these dishes – writing about them and going through the photos has certainly made me hungry!  I can safely say it’s the most amazing day’s foodie indulgence I’ve enjoyed in a very long time.  I can’t wait to experiment some more with the recipes and let you know how I got on!

The big day was today – I’m finally back home from London (seriously, Londoners, how do you survive the Tube these days?!) exhausted but seriously excited about today’s cullinary adventure!  The competition winners met up with famous chef James Martin at the ‘Food at 52‘ cookery school in Clerkenwell, and he spent the day sharing with us some of the tricks of his trade and feeding us until we nearly popped (while he himself seemed to survive on a diet of Diet Coke and Red Bull!).  The whole event was thanks to Thomas Cook, with whom we heard James had been collaborating on aeroplane catering. 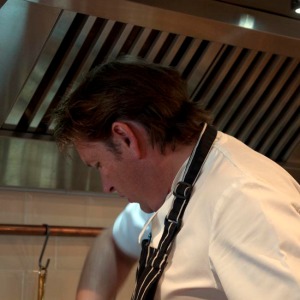 There are recipes and tips to share with you, and we’ll get to those in due course (probably once I’ve re-cooked at least some of the recipes to iron out quantities etc!) but I just wanted to share a few initial ‘teaser’ photos featuring some of the marvellous ingredients we got to ‘play’ with today. 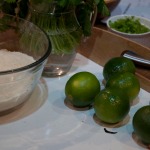 It’s also been a great opportunity to meet other keen cooks and bloggers, and I hope some fun things will come of that in the future, too!

Look forward to more blogging on the subject once I’ve had a good night’s sleep (perhaps several!) and caught up on myself a little!