We had so much to do in the garden this weekend, but the weather hasn’t been friendly!  At least we managed to get the turf cleared from the unpromising rectangle of old ridge & furrow grass which is to be my experimental cut flower patch – watch this space for more (and photos!) in due course.  The greenhouse seedlings continue to thrive, though I’m struggling to believe the tomato seedlings are ever going to grow up big and strong enough to fruit! This time of year in the garden is always a mix of hope and doubt, without much to show yet for our efforts! 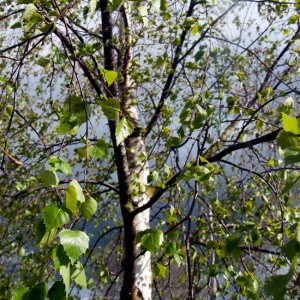 But it’s raining, and there’s nothing to be done outside for the time being!

I hate to have my hands unoccupied (stop giggling there in the back!) so I suppose it was only a matter of time before I gave in and took up crochet.  Many years ago (half a lifetime, really!) I learned to knit, got good enough at it to make myself a jumper, and mastered some fiddly cable work, but it never really grabbed me.  I’ve always been impressed by the flexibility of crochet work, the variety of shapes and textures which crochet seemed to be able to achieve compared to two-needle yarn craft.  And then, about three weeks ago, by chance, I stumbled over the first part of a learn-to-crochet part-work magazine, complete with a 3.5mm hook, two balls of yarn, and a guide to basic stitches. All for 99p.

Well, I couldn’t resist. I started tinkering with a few stitches and patterns from the starter pack.  I did a bit of playing and made a little round basket out of some jute garden twine, just to see if I could.  It’s the simplest thing, with just a circle of double crochet stitches for the base, made without turning, and sides the same, but turned between rows, picking up only the front loop of the  V to add a horizontal stripe. 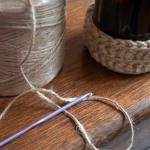 It makes a lovely coaster for the bottle-cut vase I made a few weeks ago, using the bottle cutting jig I made last year.  Better still, it was surprisingly easy to make, despite the less than promising choice of yarn!

So that was it, really, I was hooked.  Obviously a single hook and a big ball of garden twine wasn’t going to get me very far, so I scurried off to the internet for a few supplies (oops!) – a couple of books for inspiration, a lucky-dip selection of yarns, and of course a set of different sized hooks.  I was good to go!

What do you make first but a scarf? Of course! 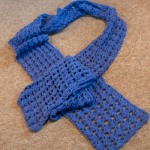 I’m really happy with my first effort, the pattern is from Sue Whiting’s ‘The Crochet Bible’, which has served me really well as a crochet primer so far!  For a complete novice it was a nice simple project which gave a pleasingly complex-looking result, and came together over the course of just over a week.  I used a heather-coloured yarn I got in my mystery-pack, and I’m thrilled with the result.  The photo doesn’t quite do it justice, it’s not as blue as that!

Dave kindly offered to model it for you all, so you can see it a bit more clearly. (He continues to do very well, thank you for asking!)

Of course, I couldn’t stop at just the one project.  The current one is straight out of my own head, a crochet string-bag for the summer – I think it would be great for a day at the beach.  I’ve used two of the colours of yarn in my lucky-dip pack that I think I’d struggle to wear – an orange that can only be described as ‘health & safety high-viz’ and a bright sunny lemon yellow.  I’m after a relaxed, cool, hippy-ethnic look, and I think we’re headed in the right direction – more photos, and instructions, once it’s finished, but here’s a sneak-peek of the work in progress..!

Finally, some sad news this weekend from my hens – Gertie, my white hen, and the final member of my original hybrid quartet, went the way of all things on Saturday.  So RIP, dear Gertie.  All good things come to an end…  There’s always been a white hen in my hen-house.  I feel rather bereft. 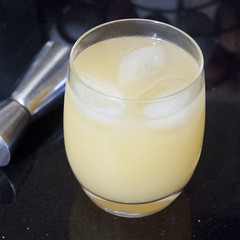 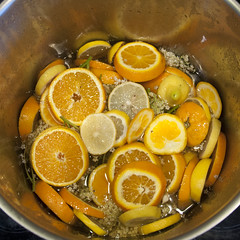 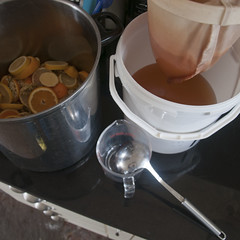