The blog has been a bit neglected the past month! There’s been a lot going on just recently – most of it good, but which I can’t really talk about at the moment (The mystery! The suspense!). 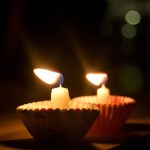 A few weeks ago, the blog’s second birthday passed entirely un-marked, a fact which will come as no surprise at all to my close friends and family, who are all well used to their birthdays and significant anniversaries passing equally without notice! Anyway, a huge thank you to all of you who read and comment, thank you for taking the time and bearing with us though this quiet interlude!

Right oh, back to the hot and spicy business at hand!

Last weekend, we admitted the arrival of the colder weather and stripped the greenhouse chilli plants of all their fruit.  The result was almost exactly 1 kg of mixed home-grown chillies, mostly ‘Vampire’, a mild flavoured mid-sized dark purple to red variety with beautiful purple-green foliage and purple flowers, and ‘twilight’, a fiendishly-hot small chilli which ripens from purple to red via white & yellow on a small-leafed plant. 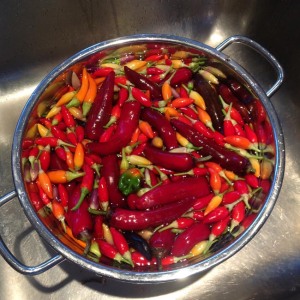 Aren’t they gorgeous? Even I can’t eat that many fresh chillies before they go off, though.  I considered making chilli sauce, but in the end settled on pickled chillies as more versatile to use down the line. And with all these gorgeous colours and varieties, it would have seemed a bit of a crime to put them in a food processor!

This recipe is based on one attributed to Michael Symon, from Michael Ruhlman’s blog, with a few modifications to suit the ingredients I had available. It’s really straightforward, and the results *look* stunningly pretty – it’s too early to say how they taste yet! 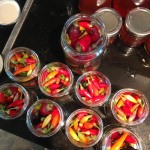 Wash your chillies carefully, inspect them and set aside any which are damaged or imperfect (you can always cook with these fresh, or process them and freeze in small batches) and then pack them into cold sterilised jars. Then fill each jar full of water, before tipping the water back out into a bowl or jug. Measure this volume – this will give you a good accurate estimate of the volume of pickling liquid required. In my case, using eight small jars and one large one, the volume was a bit over a litre.

For the brine, I combined –

Obviously these volumes can be adjusted depending on how much pickling liquid you need! Mix these in a saucepan and start to warm, dissolving the sugar and salt, then add the following herbs and spices and bring to a good rolling boil – 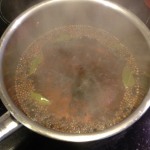 Once the brine is boiling, turn the heat down and simmer for 10 minutes.

Then, if you’re making a single large kilner-type jar of pickled chillies, you could just pour the whole volume of brine, spices and herbs over the top and seal up the jar.

I wanted to make sure the spices were evenly distributed between my eight small and one large jar, so I first strained the solids out and returned the brine to the saucepan to keep simmering. 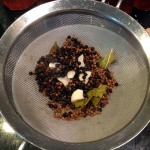 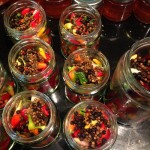 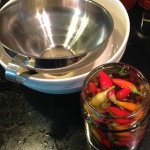 This made it easy go share the spices and garlic out evenly between the jars with a spoon. Then just ladle the boiling hot brine into the jars, filling them all the way to the brim before sealing tightly with plastic-lined lids. 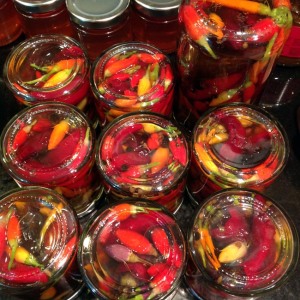 Once cool, refrigerate until use, or at this time of year in Northern climes you should be fine to store them in an unheated outbuilding, garage or shed. They’re ready to eat within a day or two but a few weeks in the pickle will only help develop the flavours. When you’re ready to use them, just slice or mince the chillies and use in cooking as you would fresh – obviously only in dishes that will tolerate a little bit of added acidity from the vinegar, most will – but beware, these are going to be an unpredictable bunch, and the little ones bite!