I’ve been wanting to play some more with the bottle cutting jig since my first attempts at bottle cutting a few weeks ago.  This weekend I found a few hours and raided some bottles from the neighbours’ recycling bins, and got to work. 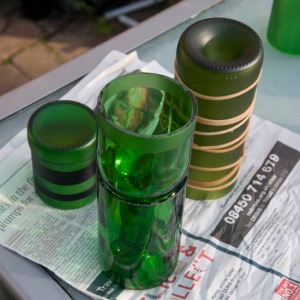 My success rate this time stayed stubbornly around the 1:3 mark.  It’s becoming clear that two things are combining to be a problem.  The first is that accuracy in the score mark is absolutely critical – if you don’t get a perfectly straight even score that meets neatly, there’s no chance of the bottle breaking cleanly.  The second is that bottles are *rubbish*.  Of the bottles I’ve cut – and failed to cut – so far, not one is made up of even thickness glass, and most of them aren’t even anywhere near round in section!  This makes getting an even score more challenging, as well as tending to make the bottle break unevenly as a result of the variable thickness of glass.   There are a handful of gadgets on the market (and one interesting looking one, called the Kinkajou, about to come on the market) which might well improve my hit rate on nice reliable score lines, but I’m still trying to keep this a low-cost hobby for now! 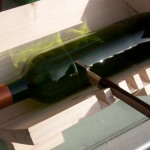 Still, a couple of hours work (mostly removing labels!) got me three new nicely cut bottles – a 500ml green cider bottle, and two punt-bottled wine bottles, one of which I cut long, and discarded the top to make a vase, and the other cut more centrally to give a top and bottom section.  Sanding down (see my previous post for more details of the cutting process) gave me safe cut edges. 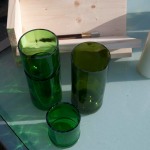 I’ve really wanted to play with etching, because I’ve seen some beautiful glass decorating projects, but hubby really wasn’t very enamoured with the idea of me using concentrated acid paste in the kitchen (and I can kind of see his point!).  I settled on using some frosted-glass effect spray paint made by plastikote.  This slightly offends one of my fundamental design principles, actually, but never mind!

The ideas for using the bottles were mostly gleaned from Pinterest, which is a new and rather addictive time-sink (those of you who’ve also discovered this can have a browse of my boards here).  I used some black sticky-back vinyl as a masking material for two of the pieces. 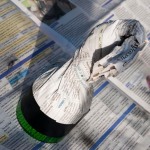 Isn’t it great when you discover that the bits and bobs you’ve bought for one craft can be pressed into service for another?  I dug out the rotary cutter, ruler and cutting mat I bought for quilting, and got to work cutting strips of vinyl.  Two to wrap around the bottom of the cider bottle, to give a striped finish, and the off-cut with some newspaper to mask off all but the edge of the cut-off top of the wine bottle. 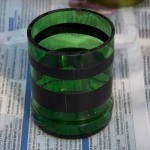 This vinyl is a great masking material for glass, as it adheres tightly, stretches just a little to account for the wonkiness of the bottles, and comes away cleanly without leaving any residue.  The resulting cider bottle makes a very pretty tealight holder which would make a lovely little gift. 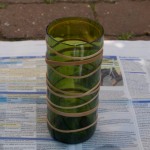 For the bottle destined to be a vase, I borrowed another idea in wide circulation on pinterest and applied rubber bands, some overlapping, rising and falling. The first thing to note about this approach is that the rubber bands don’t arrange themselves  – it actually takes quite a lot of faffing to get a pleasing arrangement of lines.  They’re not an ideal masking material, either.  As you apply the instructed two or three layers of the frosting paint, some will settle on the top edge of the rubber bands (this is much less of a problem with vinyl which is very thin and doesn’t collect ‘overspray’ in this way). 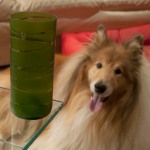 The rubber bands came off easily once the paint had dried overnight, but it took quite a lot of delicate trimming away of the extra paint with a scalpel blade to get a reasonable finish.  I’m still not entirely happy with the outcome, and if I try this approach again I’ll try to get away with one, perhaps two layers of paint rather than the three I used.  Still, the result is quite pretty, isn’t it?  Dave said he wanted to be in the photo, and who am I to disappoint him? 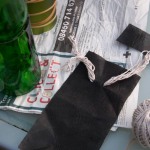 Finally, and perhaps most interesting for me, is the bottle cut in half.  I’ve made a self-watering herb planter, based on a photo I saw – guess where? – that’s right, pinterest again.  The top of the bottle is up-ended inside the bottom.  I lined it with a cut rectangle of landscape fabric about 4″ by 8″, one half of which I threaded through with a bunch of jute string. Fold this in half with the string dangling through the neck of the bottle. Then, fill with compost and plant (in my case, with some rather sorry-looking home-grown basil I always forget to water).

This is where I admit to being a really neglectful gardner.  I’m full of enthusiasm, but when it comes down to it I have a nasty habit of forgetting to water, to pot on, to plant out…  my garden thrives on it’s own resources more than on my care, and my houseplants have to have a strong will to survive! 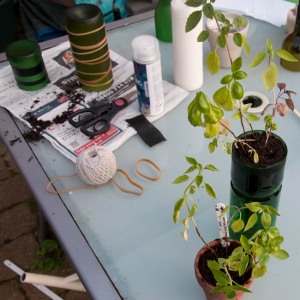 So if this contraption actually works (and the jury is still out on this – it’s early days) then it’s going to change my window-sill gardening forever.  Herbs that will water themselves!  In a planter which is recycled, free, and really pretty, rather than something ugly and plastic and more suited to greenhouse shelving than living room windows.

I’ll update with more photos of the herb planter once it’s clear whether there’s any merit to the design.  In the meantime I suspect there’s quite a bit more mileage in breaking bottles for fun and (perhaps??) profit…