Hi! You’ve arrived at the archived 2015 Edition of the Countryskillsblog.com Eurovision Drinking Game. For the fully updated 2016 Edition, click here!

Well, folks, it’s that time of year again! The 60th Eurovision Song Contest will take place in Vienna, Austria, this coming Saturday May the 23rd. Where has the time gone?

This game is becoming a bit of a fixture on the blog, and slowly but surely is gathering a loyal following! Last year the Dutch broadcaster Pow.ned even recommended it to their viewers as part of their Eurovision coverage. How about that then?

Like so many good and worthwhile ideas, these rules started life at a university party, well over a decade ago. They have been carefully curated and updated over the years, and play-tested by a number of kind ‘volunteers’, some of whom even recalled enough the next morning to provide helpful feedback and suggestions! So, without further ado, I present to you – The Countryskillsblog.com Eurovision Drinking Game, 2015 Edition.

This is a forfeit game. A variety of features of songs and the performances have been selected, and their appearance triggers a drinking forfeit. This is usually (but not always!) ‘take a swig’.

It’s a really good idea to divide up the countries and songs between your players. You might do this by ballot, draw straws before each song, or adopt some other creative or arcane method of your choice. Smaller parties may chose not to allocate a player to every songs. All of the players playing for every song is likely to result in unpleasant consequences, and cannot be recommended!

Certain features of the song and performance trigger a forfeit. These features can appear more than once in a performance (and sadly, often do!) and ‘score’ each time they appear – so the now legendary ‘Bucks Fizz’ skirt removal would represent a single costume change, because it happened in one go, but a song that repeatedly swaps languages or makes major-to-minor-and-back-again key transitions triggers a forfeit on each switch.

In this auspicious 60th Eurovision year, we wish our friends from Down Under a warm G’day and welcome. Australia grants the Eurovision Song Contest similar cult status to back here in Blighty – as an international Gay Pride event and an excuse for a darn good piss-up. This year, our Australian friends have been invited to join in the fun as special guests! So for one year only (unless they win, of course, and get to come back next year) here are some ‘Fair Dinkum’ bonus rules to help get you absolutely roaring. 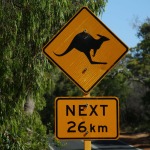 Ah, that beautiful Land Down Under, where blokes wrestle crocs or kangaroos while wearing hats with corks hanging off them. Gorgeous bronzed sheilas surfing on Bondi beach. Koalas, kookaburras, gum trees. Waltzing Matildas. Very large red rocks in the outback. Vegemite, tinnies, and prawns on the barbie. And all while upside down!

The host country puts on a performance on during the ‘voting gap’. Everyone plays for this segment, using the same forfeit list as for the songs.

For your convenience, I have made a ‘cut-out-and-keep’ forfeit card. Aren’t I thoughtful? Click for the full-size version, print it out and hand out copies at your party, or save to your mobile devices and share the Eurovision love!

Graphics for the cut-out-and-keep forfeit card are use under Creative Commons licenses, see links for details: Flags by Anka Pandrea, Glasses by Nora Raaum.

The voting round should be considered advanced play, and may be unsuitable for novice players or those with a delicate constitution. These rules are intentionally kept simple. They need to be, by this time in the evening!

Well, that’s all, folks! Have fun at your Eurovision parties, and if you do decide to try these rules, please do comment here or tweet me @CountrySkills, where it’s quite likely some Eurovision live twittering may take place!