“Hi, my name is Kate, and I have a cookbook problem…”

I just can’t resist them. A nice cookbook is such a marvellous object, it’s a thing of beauty, solidly bound and gloriously illustrated, as well as containing the promise – such promise! – of tasty food to come. So, I buy cookbooks (and people buy them for me, too, of course), and continue to buy them until they overflow our bookshelves and end up living in piles under coffee tables and stacked against the walls of our little cottage. As I said, it’s a problem. Last year sometime, I had a quick count up – and stopped counting when I got close to 100.

All those books – all those different recipes – and yet it’s relatively rare that I cook something completely new. For all the usual reasons – busy lives, habit, and having a really good set of family-staple recipes we come back to time after time. But it’s good to push out of your culinary comfort zone – for how else do we learn? – and with such a wonderful resource at my fingertips (and, sometimes, underfoot!) I really have no excuses!

So to welcome in 2014 – and in lieu of a New Year’s resolution – I’ve decided to set myself the challenge, once a week if I possibly can, to cook a brand new recipe form one of my cookbooks, and write it up for the blog, adding a little review of the book itself. Obviously such a silly endeavour needs a name, so I think we’ll call it ‘Cooking The Books’. 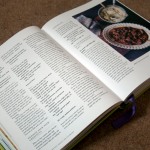 Today’s recipe is Venison Pie, and was chosen because Hubby found some lovely wild venison at the Farmers’ Market. The recipe is from Darina Allen’s beautiful big hardback cookbook ‘Forgotten Skills of Cooking’, which came to me as a gift from my Dad last year.

I’ve scaled down the quantities because there are only two of us (the original recipe serves 8), and made a couple of minor modifications to account for ingredient availability. In general I’m trying to stay as close to the original recipes as I can – or what’s the point, really? This will, inevitably, affect my choice of recipes  – I really don’t want this challenge to end up filling my kitchen cupboards and fridge with half-used packs of ingredients that just go to waste! Actually, thinking about it, this is a big factor in why I don’t often cook from cookbooks. But enough housekeeping – let’s get on with the cooking!

Start by preparing your venison. Darina’s recipe calls for venison shoulder, cut into pieces, but I had a ~1lb pack of already-cut stewing venison. It’s worth taking a little time to trim out any particularly obvious gristly bits from your meat at this stage. Also try to pull out any deer hairs you discover in your meat (which isn’t a particularly unusual thing to find with wild venison, because of the way it’s shot, handled and butchered).

Now mix the meat into a marinade consisting of – 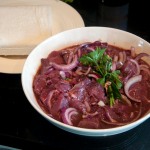 Ideally you might allow this to marinade overnight, but even a few hours will make a big difference. Cover the bowl and place it in the fridge. If, like me, you’re going to use frozen prepared puff pastry to finish the pie, now would be a good time to take it out of the freezer, and either place in the fridge to defrost overnight, or out on the side in the kitchen if it needs to defrost faster than that. Pastry is always better worked reasonably cold,so once it’s defrosted, put it in the fridge so it’s nice and firm.

Once your meat has marinaded to your satisfaction (I gave it three hours), drain the meat in a colander over a bowl, retaining the marinading liquid.  While it’s draining, get together the ingredients and equipment you’ll need for the next stage –

Pat the pieces of meat dry with kitchen paper and coat them in seasoned flour (I needed about 2 tablespoons). I picked the meat out of the sliced onions, but this probably isn’t necessary. This bit of the process is pretty faffy, to be honest, and is something I tend not to bother with when making stews. Let me just say, though, it produces the most wonderful, silky, rich gravy, so I may be using this trick a lot more in the future!

Meanwhile, in a frying pan, fry off the bacon until it starts to brown and donates some of that lovely bacon fat. Once it’s done, transfer the bacon to a big saucepan.  Now brown the floured venison in the bacon fat. You may need to add a little extra olive oil. Transfer this to the pan once there’s some nice colour, and fry off the onions, carrot and garlic for a few minutes before adding them to the pan as well. 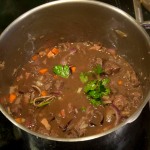 I couldn’t see why I’d waste the nice sliced onion from the marinade (and the recipe doesn’t appear to specify what should be done with it), so into the frying that went until it softened nicely, and joined the rest of the ingredients in the saucepan.

Now we’re called to deglaze the pan with the wine marinade, and transfer this to the saucepan with all the meat and vegetables before topping up the pan with the beef stock (pre-heated, if it’s proper stock) until the meat and vegetables are just covered. I added a bit of extra water and a slosh more wine to make up the volume. Finally add back the bouquet garni from the marinade, cover the pan and simmer very gently on a low heat for about an hour and a half (or a bit longer if required), until the venison is beautifully tender. Keep a reasonably close eye on it, stirring occasionally, and make sure it doesn’t catch on the bottom of the pan.

Once you’re happy the venison is perfectly cooked, you can take it off the heat. Time to add the last few bits, which are –

Wash out your frying pan and heat up a couple of spoonfuls of olive oil. Saute the mushrooms until colouring slightly, and once they’re done, add them to the pan with the chestnuts, cut in halves. Now taste to check your seasoning. The recipe suggests you might slike to add some redcurrant jelly, or a pinch of sugar, or possibly even some lemon juice at this stage depending on how things are coming together.

I did find there was a slightly lacking sweet / acid note so substituted about three teaspoons of my homemade French apricot jam (avoiding the whole bits of fruit), one at a time and tasting carefully in between. It’s slightly miraculous, actually – makes such a huge difference to the final flavour. Add a bit more salt and pepper at this stage if required.

You could serve it now and call it a venison stew, and it would be wonderful with mashed potatoes on a cold winter’s night. But we’re going the whole hog and turning it into a pie, so transfer the filling into your chosen pie tin – I’ve used my gorgeous, very traditional, white and blue enamelware dish. Get your block of puff pastry out of the fridge and roll it out.

The book suggests a way of attaching the pie crust in a two-stage process, fist attaching a strip of pastry all around the edge brushing with  water beneath and on top, before adding the pastry lid, trimming the excess, scalloping the edge with the handle of a spoon, and egg-wash the surface, adding some decoration if you wish.

Pierce the centre of the crust and put into a piping hot oven for 10-15 minutes before turning the heat down to about 190C until the crust is golden and the contents bubbling hot. If your oven has a hot-spot (most do) don’t forget to turn the pie around at some point to keep the colour even.

That’s it – isn’t it beautiful? Time to serve with your choice of accompaniments. Hubby requested roast potatoes, so we had those and steamed broccoli to go with it.

What can I say? It looks pretty spanking, and tastes glorious. I love the way the late addition of the sauteed mushrooms means they retain their separate flavour, texture and identity in the dish. The venison is perfectly tender, the gravy is rich and thick and full of  beautifully balanced flavour. These quantities will feed four, I would say.

I heartily recommend you make this pie!

This is undoubtedly a time-consuming and relatively labour intensive recipe, with four separate preparation stages. Consequently it generates quite a bit of washing up, too – I counted a saucepan & lid, a frying pan, a pie dish, two mixing bowls, a colander, chopping board and knives, garlic crusher, pastry board (or your kitchen worktop), rolling pin, an assortment of spoons of different sizes, a spatula, and I’m sure I’ve forgotten a few bits. But nothing unusual and no gadgets or gizmos required. I started marinading the venison just after lunch, and we eventually ate around 7.

It’s a reasonably complex recipe, but no part of it is particularly technically demanding and no special skills are required – anyone who can follow a slightly complicated set of instructions should be able to cope! While there are a lot of ingredients, they’re quite ‘standard’ ones and pretty much all of them were already in my fridge and kitchen cupboards, which was a big bonus.

Perhaps something a bit quicker and simpler for next week..?

[Full disclosure: This is my book, which was a gift from my Dad. I have received no payment or sponsorship for this post, nor have I accepted a review copy. I do not have an amazon affiliate account and do not profit from any links provided.]

This is a fabulous book, full of unexpected surprises – I only realised after I’d written about the copper-cleaning power of salt and lemon juice the other day that this is one of the tips in the back of this wide-ranging tome! As well as a really good range of hearty traditional recipes, both sweet and savoury, with a focus on quality local seasonal ingredients, there are – amongst many other things! – instructions for buttermaking and producing your own clotted cream, curing and smoking techniques for meat and fish, yeasted and sourdough bread baking, and even advice on choosing livestock. It’s also a beautiful book, richly illustrated and nicely printed, which never hurts.

I would say that it deserves a place on any cookbook shelf, particularly so if, like me, you’re more interested in traditional farmhouse, country food and techniques  than in ‘cheffy’, restaurant-style cooking.