Christmas cake is a real ‘anchor’ for me, one of those food experiences that connects back, right through my life and my family history.  I wrote a bit last year about how baking the cake takes me back, every year.  I learned my cake from my grandmother – she learned it from Delia! – and I’ve only ever baked it and decorated it this one way.

After it’s been baked, usually some time in early November, I wrap it up in a few layers of greaseproof paper and stash it away in a tin. To keep it happy, it gets a tot of booze every week or so.  For the last few years I’ve baked it with, and then fed it on calvados (French apple brandy), because I think it adds an extra lovely fruity note compared to the traditional sort. 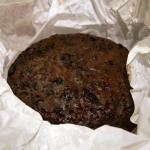 Once it’s nicely sozzled, and in time for Christmas, it’s time to get it all dressed up in its party frock!  More years than I can count, I’ve ended up decorating the cake on Christmas Eve – but I’ve been a bit better organised this year (well, OK, I wanted to make sure it was all ready in case someone fancied a slice this weekend!). 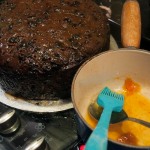 I ice my cake in two layers, first a nice thick layer of marzipan, and then a layer of royal icing.  Finally, the cake gets a decorative marzipan poinsettia to top it off.

First, to make sure the marzipan sticks down securely, I brush the cake with melted apricot jam, slightly loosened with some water and warmed in a pan on the hob.  A desert spoon of jam or so is plenty.  Brush it on generously with a pastry brush.  This is home-made jam, so has some big chunks of apricot in it, which isn’t a problem, just work around them and leave them in the pan!

Now roll out your marzipan.  Mine was bought (sorry!) nice golden marzipan.  There’s about a kilo here. When working with marzipan, use icing sugar to dust down your surfaces and rolling pin, the same way you’d use flour when working with bread or pastry. Roll the marzipan out to the thickness you prefer, and make sure that it’s plenty bigger than the cake and sides in all directions. 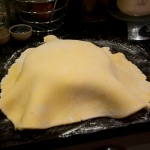 I know the baking aficionados on telly would have you apply your marzipan in two pieces – a round piece for the top of the cake, and a long thin band around the side.  I can’t see any reason to do this, for this cake at least – if you’re careful it’s possible to get a perfect layer with a one-piece approach.  In fact, the only merit I can see to the two-piece approach would be if you’re trying to get a sharp, 90 degree edge between the top and sides of your cake – in which case you’ve already started by cutting the top off – what a waste!  Gently place the big, rolled out piece of marzipan straight over the centre of the cake.

Now, very gently, using the palms of your hands (dusted with icing sugar as required) push the ‘skirts’ inwards, towards the sides of the cake.  As you can see, I managed to get it all to sit snugly against the side of the cake.  But if you muck it up and get folds?  Just trim off the excess marzipan from the fold with a sharp knife, and stick the edges back together using a little bit of tap water.  The icing will conceal a multitude of sins! 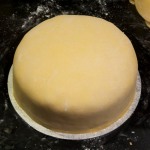 Trim off the excess marzipan. I used the edge of the board as a cutting guide.  This sounds a bit generous, but it’s about the distance you want to leave.  I’ve over-trimmed in the past, and had to add extra marzipan back, so I now subscribe to the adage that you can always cut more later!  Once cut, gently nudge the marzipan in towards the base of the cake all around.  Anywhere you have an excess of marzipan, trim a bit more at this stage. You’ll be surprised how little there is, though.  Wrap up any extra marzipan you have left over tightly in cling film, and store in the fridge.

Ideally, let the marzipan dry out for a couple of days before applying the icing, though I’ve done it all in one night from time to time when necessary!  This gap is supposed to reduce the oiliness in the marzipan to reduce the risk of this ‘striking through’ and discolouring the icing.  I’m not sure how or whether this works, to be honest, and I’d love to say I’ve noticed a difference.  But I had time this year, so I gave it the 48 hours.

My royal icing is made up of 3 large egg whites (I weigh my home-produced eggs and compare them to the egg size guide for this sort of cooking, since obviously they don’t come out of the hens graded!) 500g of icing sugar, and a teaspoon of glycerine.  I have forgotten the glycerine once or twice – it’s not a disaster if you can’t get any, but doing so does mean the icing sets very hard, so mind your dentures! 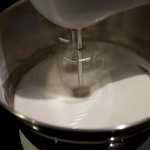 Start by spooning your icing sugar into your egg whites a bit at a time, stirring as you go.  It will look horrible and lumpy until right at the end, so don’t despair. Once it’s all incorporated, and you have a heavy gloppy-sort of consistency, start beating the mix with an electric whisk.  You really do want the electric whisk for this job – trust me, I’ve made royal icing with just a hand whisk one year, it’s *incredibly* hard work! – and ideally, if you have one, use your stand mixer. 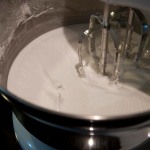 Even with an electric whisk it will take about ten minutes to get to the consistency you want, and I found that even with a handheld whisk I tended to get to the ‘I’m bored, sod it, that’ll do’ stage before the mix was really done!

You’re after ‘stiff peaks’, which roughly means that the icing stays in whatever shape you place it in.  If you stop the whisk, you’ll get an idea pretty quickly by watching what happens to the ripples in the icing, which should be very stable.  You can test this by raising some peaks with the point of a knife, or your spatula.  If they stay there, you’re done.  Add your spoon of glycerine and stir this through the mix.  It adds a lovely shine to the icing.

Now, start slapping it onto the cake. 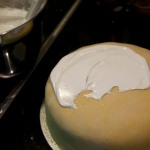 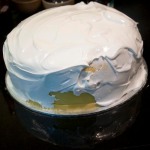 Rough is good – you’re after a ‘snow scene’ effect, though I’ll be honest and say I’ve never seen a snow scene quite like this! 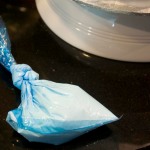 Still, it’s what my grandmother’s cake looked like, so it is with mine!  Once you’re happy you have a good covering, spoon any extra icing into a small plastic bag, and tie this off securely, excluding all air, and stick this bag in the fridge for later.  The icing now needs to set for at least 24 hours.  Then, it’s time for the final flourish.  For me, it has to be a poinsettia pattern in marzipan, but you could just as easily add holly leaves & berries, or even a Christmas tree, using a very similar approach.

Dig out the surplus marzipan from the fridge, and divide it into uneven thirds (two larger, one smaller).  Dye the two larger portions red and green using food colouring.  I find putting a sheet of cling film down on the kitchen counter when playing with food dye seriously simplifies the clean-up.  Also use plenty of icing sugar to stop things sticking.

It was around this point that I remembered that last year, I’d made a mental note to try to find some better food colouring – I’m sure the food colouring my grandmother had only ever took a couple of drops, I seemed to have to ladle this stuff in by the spoonful!   Mind you, it was probably full of nasty artificial colours we’re not allowed to use these days…   You’ll get there eventually, even if your food dye is as wimpy as mine, and have the building blocks of your final decoration.

Roll out your green marzipan, and cut out a first set of six poinsettia leaves (or however many holly leaves, whatever you fancy).  I do this freehand, but you could easily cut make yourself a paper or card template.  Snip the corner off the bag of royal icing, and you have a little prepared piping bag.  Blob a little onto the centre of the cake and use it to glue down your leaves.  Then carry on with the red leaves, in much the same way. Finally, finish with some plain yellow berries in the centre. 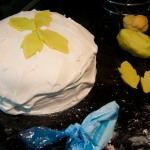 Dab the marzipan with a damp piece of kitchen paper to remove any loose icing sugar, and finish with a ribbon, if you like.

That’s it, all done!  Round about now, I get to feel quite proud, very Christmassy, and revel in the connection to decades of family Christmas tradition. 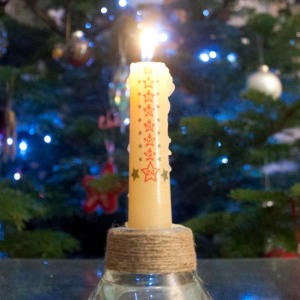 I’m trying to write a post a day during Advent, so, please come along with me while I try to Blog Advent – the Country Skills Way – and forgive me if I don’t quite manage it!