The last of the Scottish strawberries are in the shops right now, at bargain prices.  I saw some yesterday and couldn’t help myself – jam making was really not on my list of things to do this weekend (which is dedicated to sitting in a field listening to folk music!) but my timing is impeccable as usual – and they won’t be there next week.  So, 2kg of fresh ripe strawberries came home with me.  My garden is full of lavender, so the match was too good to ignore.  Why make something that you can buy anywhere, when you can make something really special and a bit unique just as easily? 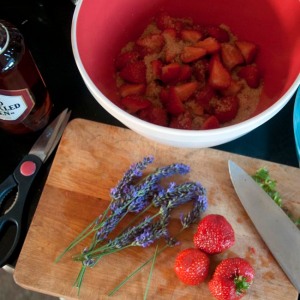 To make this jam, you will require –

Ideally, start this in the evening before you want to cook your jam.  If you haven’t got the luxury of time, though, starting four hours or so ahead will still make a big difference.

Wash and prepare your strawberries, removing the little green ‘hat’ (I use a finger nail to dig these out – but the tip of a knife or the point of a potato peeler do very well) and halving or quartering to a consistent sized piece.  You can leave the smallest fruits whole. Layer these in a large bowl, sprinkling sugar over each layer as you go.  Every couple of layers add a few sprigs of your lavender, you’re aiming to add about half of them to the bowl at this stage. 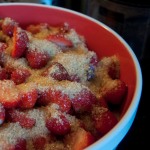 Carry on until you’ve added all the strawberries, about a dozen lavender sprigs, and nearly all the sugar (hold a few tablespoons back if you’re planning on using pectin powder).  Squeeze your lemons and orange and add the juice to the bowl. Grate some lemon zest, too, if you fancy it.  Then cover your bowl with cling film and place it in the fridge overnight (or at least for a few hours) to macerate.

After a few hours you can see the sugar has already started drawing liquid from the fruit, and is essentially all dissolved.  Our aim here is to somewhat dehydrate the strawberries, increasing the chance of them holding together through the jam-making process rather than collapsing into mush, while providing ourselves with a cooking liquor without having to add liquid, which would ‘water down’ the flavour of the finished jam.

By morning, this syrup will cover the strawberries.  Just on it’s own, this would make a gorgeous desert, with ice cream and perhaps some meringue?

Before you start to cook your jam, prepare all your jars.  I sterilise my jam jars by running them through the dishwasher for a good wash (you could wash by hand instead) before placing the jars and lids in a cold oven and bringing it up to 150C. 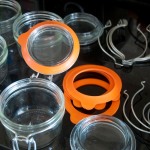 For this batch of jam I was using a few small kilner-type jars for giving as gifts, as well as some from my usual recycled stock for personal consumption!  The little kilner jars were disassembled for washing, and then put back together before sterilising in the oven.

Once your jam jars are all ready in the oven, it’s time to start cooking the jam.  Pour all the strawberries and syrup into a generously sized pan (avoid aluminium – my ‘jam pan’ is stainless steel, and is actually a big stock pot, one of these days I’ll get my hands on a lovely traditional copper preserving pan, but that day hasn’t come yet!).

Fish out the sprigs of lavender that have been marinading in the syrup overnight, and throw these away.  Add your pectin powder, if you’re using it.  It helps to combine it well with a few tablespoons of sugar first, as this will help it dissolve evenly in the jam and not form clumps.  I only had one sachet of pectin in the cupboard, which was a bit under half the recommended amount for the batch size, but decided to chuck it in anyway.  Strawberries are notoriously poor in pectin and if you’re going to use extra (or preserving sugar, to which it’s already added – often also with some citric acid) this is the jam to do it with. 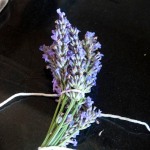 Now, go and cut another dozen lavender flowers, and tie them together with string in a little posy like a bouquet garni.  If you’re not using fresh lavender, you’ll want to tie a couple of teaspoons of dried lavender flowers in a muslin bag – or I tend to use a tea ball.  Using fresh flowers rather than dry sprigs will greatly increase the chance the flower heads will stay attached to the stem, rather than breaking off and floating around in your jam.

Add your bunch of lavender to your strawberries in the pan and bring the mix up to the boil, making sure all the sugar is fully dissolved.  I simmered mine gently for about ten minutes before brining the heat up to get a hard rolling boil.  How long you leave your lavender in is to some degree a matter of personal taste – and tasting is exactly what you need to be doing here!  I took my bunch out after the initial simmer, but then decided I didn’t have the flavour I wanted and threw it back in for another ten minutes or so of the hard boil.

Stir gently, trying to avoid breaking up the strawberries any more than necessary.  Now you’re trying to find the setting point, which you’re expecting to start to arrive after about ten to fifteen minutes of hard rolling boil.  Use your preferred method (mine is usually the cold-saucer approach), there’s a useful little ‘how to’ here.  As I mentioned, strawberry jam can be difficult to set without additional pectin, and I was struggling to get a set – rather than risk over-boiling my jam and ruining the fresh flavour, colour and texture of the strawberries, I decided to go ahead and bottle, expecting I would get a jam that would come out of the jar with a spoon, rather than a knife… not going to win any prizes at the show with these, but these are the crosses we bear!

Once you’re happy that your jam has reached setting point – or not! – pour it boiling hot into the piping hot sterilised jars fresh from your oven, and seal the lids down immediately.  I don’t feel post-bottling steps are necessary for jams, whose acidity & sugar level should produce really good preserving qualities.

I had a taste on lovely freshly baked bread for breakfast yesterday.  It’s a runny jam, but the pieces of whole strawberry give it a really lovely texture.  The lavender flavour is clearly perceptible, but subtle and not intrusive.  All in all, it’s a really great preserve that I fully intend to make again in years to come (though I may go the whole hog with the pectin to get a set next time) – highly recommended!