You’ve come to the end of the bacon challenge, hopefully sampled your efforts and agreed they are *good*, so where do you go from here?

I was very pleased (a teeny bit smug, even?) to hear that one of my volunteers has already dived in and ordered her own supply of Supracure – if you want to do the same, I can heartily recommend both HotSmoked and Weschenfelder (details in my Suppliers List) for curing and smoking supplies.  Both sell Supracure in 2kg packs for about six or seven pounds.

Before considering whether to do the same, and make curing a regular part of your culinary routine, it’s worth giving the costings a little thought.  By necessity this is just a snapshot – since food prices are constantly shifting – but it gives an indication. 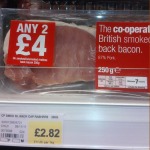 Let’s look at 1kg of back bacon.  On the basic recipe this will take 1kg of pork loin, 80g of curing salt and 20 g of sugar.  We’ll ignore the sugar for convenience, since it’s a small quantity and you almost certainly have it already.  The curing salt costs – round figures – about 30p.  So really it’s just the meat we need to consider.  You can generally get hold of bog-standard own-brand back bacon on ‘2 packs for £4’ type offers where the pack size is between 230g and 250g. Bearing in mind this bacon is about 13% added water, let’s call that an equivalent per kilo cost of about £9.

Compare with this, Tesco this week list their Rind-on Pork Loin Roasting Joint at 3.99/kg – admittedly a half-price special offer, but even the full cost of £7.99/kg represents a *small* saving.  The key to really making this work is to buy whatever’s cheap this week – be it loin or belly, or even belly slices.  It’s a pretty safe bet most supermarkets will be discounting something suitable at any given time.  Of course it pays to be flexible, but if you only like back bacon, buy loin when it’s cheap and freeze it – or make a big batch all at once and then freeze it once it’s bacon – personally I can see no difference in quality from doing this, though obviously you should do one or the other, not both!

To even start to compare like with like, though, it’s really good dry cured butcher’s bacon you need to consider – a spot of quick googling suggests this is for sale from various producers at about £15/kg.  So it’s clear that with a bit of canniness, not only is the end product fantastic, but there’s an easy 50% saving to be made on the cheap & nasty brine-injected supermarket commercial bacon offering, and a tidy 75% off the nearest equivalent butcher’s bacon.  Streaky bacon is usually a little cheaper than back, but since belly pork is a cheap cut par excellence, the maths for home-cured streaky bacon generally adds up just fine without depending on special offers.

Convinced?  Then you’ll need to decide what to try next.

My usual ‘house’ cure is actually a black pepper cure – essentially the cure we used for the Big Bacon Challenge, but with 3 grams of freshly ground black pepper (I recommend a pestle and mortar for this) added per 50-60g of cure mix (curing 500 – 600g of bacon).  This cure is great with or without smoking the bacon after curing – more of which later.

If your taste runs more to cooking bacon for stews and sauces than to breakfast rashers, perhaps try the bay and juniper cure, which produces a lovely deep rich aromatic flavour.

The limit to what to add to cures really is your imagination – within some basic limits on proportion of salt and sugar (I’ve used between 20% and 33% sugar with great success) – do some reading (perhaps look in the Library for inspiration) and see what you fancy!

I can’t leave the subject of bacon curing without a brief mention of smoking.  Not everyone likes smoked bacon, of course – though since commercial ‘smoked’ bacon has concentrated smoke-flavour added to the brine, and bears about as much resemblance to the real thing as Nescafé does to a real steaming espresso, perhaps it deserves a second chance..?

I’m British, so when I think about smoking bacon we’re talking about cold smoking.

The key to this process is bathing your cured meat in cold smoke over a period of several hours (I usually smoke my bacon for 10 – 12 hours), so you either have to produce your smoke consistently, and with as little heat as possible, within the smoking box, or produce hotter smoke at a distance from the box and then ‘duct’ it in allowing time for it to cool down.  It’s a tinkerer’s paradise, so please do consider it for a bit of a mad project – there are as many designs for DIY smokers as there are people who build them I think!

We designed and built a wooden tower smoker – effectively just a fancy wooden box with some shelves in it – which I fill with smoke using a commercially available cold smoke sawdust burner.  I probably could have constructed a smoke generator very similar for not much money, but I wanted to start with something that would Just Work, the cost wasn’t prohibitive (around £20) and I don’t regret the decision.  It’s a great piece of culinary gear, think how much fun – and flavour! – you could have with smoked trout and salmon, smoked salt, smoked garlic and chillies, as well as your bacon!

Finally, a big thank-you to all my Big Bacon Challenge volunteers – looking forward very much to hearing what you all thought of your efforts  – and to the rest of my readers, thank you for your patience with the bacon-centric tone of the blog the last couple of weeks, normal service will be resumed very soon!

All the Big Bacon Challenge posts will be collected under the ‘BigBaconChallenge’ category heading – so go there to read them all!

4 thoughts on “Big Bacon Challenge: after the challenge – what now?”