A whole roast chicken is a wonderful treat – more on that later – but it’s not the sort of meal most people want to wait for on a week night after work.

We eat a huge amount of chicken in the UK, and a lot of that is bought pre-portionned and packed from the supermarket, it’s certainly convenient and the portion sizes are more practical.  We’re in love with breast meat in this country, to the extent that the UK is a net importer of white chicken meat – mostly from Thailand and other East-Asian countries – and an exporter of leg meat.  When you think about it, that’s pretty bizzare, not great for the environment (think of the fuel involved in sending the ‘wrong’ chicken backwards and forwards half way around the world!), and leaves us eating lower health and welfare-standard poultry meat than would have been produced in the UK. 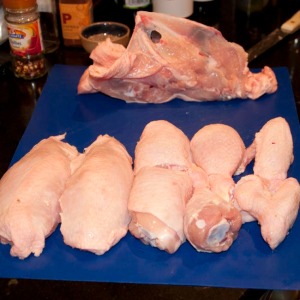 It’s really easy to portion up a whole chicken, and learning this basic butchery skill will save you money.  Even if you just buy a ‘bog-standard’ roasting bird from the supermarket, you get more for your money buying a whole bird and cutting it up yourself, and the savings are even better if you’re buying free range or organic chicken.  And with a bit of kitchen creativity, one whole chicken can provide three or four meals for two people, as well as a lovely batch of chicken stock – bargain! 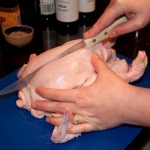 First, un-wrap your whole chicken and remove any trussing string / elastic holding the legs together.  Pat it dry with kitchen towel as this will help with handling it while you’re cutting it up.  You will need a very sharp knife with a long but reasonably slender blade.  Feel down the centre of the bird, and you should feel a bone running the full length – this is the ‘keel bone’.  Starting on this line, cut downwards parallel to the bone along the full length until your knife stops. 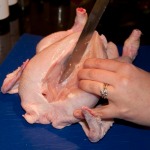 You can now pull the top of the breast away from the keel bone to get a better look at what’s going on.  The bone beneath the knife is the ribcage, so continue carefully cutting the breast meat away from this.  If you work carefully you’ll leave surprisingly little meat behind on the carcass.  After you’ve done this a few times, you’ll get a lot quicker, but speed is not of the essence the first few times. 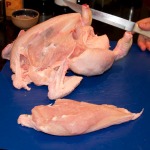 Once the breast meat is mostly free from the bone, cut the skin between the breast and the thigh and finish removing the breast from the bird. 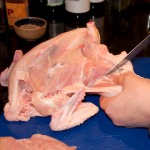 Now we need to detach the legs.  Grasp the thigh and extend the leg away from the body.  You should be able to feel the hip joint (indicated with the knife point in this photo).  Insert the knife firmly into the joint to separate the leg from the body, then cut the leg meat away from the torso leaving as little as possible behind. 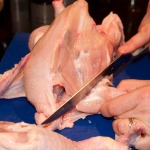 Grasping the wing in the same way, identify the joint and push the knife firmly through it, separating the wing from the body of the bird. 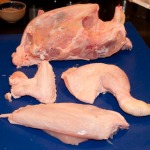 Congratulations, you’re half way there!  Repeat the process on the other side of the bird.

You will now have two breasts, two legs, two wings, and the remains of the body.  Put the body in a saucepan ready to make stock.  You may be happy with the portions you have now, but more commonly we’d divide the legs into thigh and drumstick portions 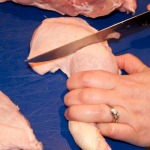 Grasp the leg, and feel where the joint moves between the thigh and the drumstick.  Simply cut down firmly along this line.   If you’re accurate your knife will pass through the joint space, but the bone here is actually quite soft so if you’re not quite on target, you should be able to cut through anyway, it will just take a little bit more force.   Cut off the ‘knuckle’ part at the bottom of the drumstick in the same way, and discard these (the only bit of waste in the process, as it happens!). 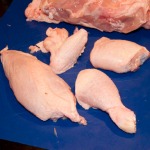 You’re there – one whole chicken transformed into two breast portions, two thighs, two drumsticks and two wings, to do with as you please.  With practice it’s less than a five minute job.  Better still, think of the costings.  With standard supermarket chicken (I costed this in my local co-op the other day), starting with a £4 bird, and bearing in mind two breast fillets retail for £3 (smaller fillets than you’ll get from a roasting bird, with the skin off and frequently robbed of their ‘mini fillets’, too!), you’ve just got two thighs, two drumsticks, two wings, and a pint of excellent fresh chicken stock for £1.  Use what you want today, and bag and freeze the rest.  How’s that for thrifty!

I said I’d come back to roasting chicken.  That’s for the next post!

10 thoughts on “Basic Butchery – how to portion a chicken”