BBQ season is here! The evenings seem noticeably longer, almost every day, and it’s warm enough to hang around outside until sunset. And as if that wasn’t enough, it’s a bank holiday weekend here in the UK. So really, I had to go to the cookbook collection to find some BBQ cooking inspiration. 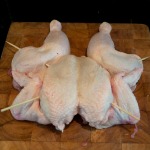 I have modified this recipe slightly – the original calls for six bone-in breast pieces, but I much prefer to do a whole bird. You could portion it up and cook the pieces separately, but I think doing it whole, as a spatchcock, is much more fun!

To make this, you will require –

Finely chop your onion, mince or crush the garlic cloves, remove the zest from the lemon with a grater or zester (or use a vegetable peeler and slice the peel finely), and grate the root ginger finely. For a smoother result, you could put the onion, garlic, lemon zest and ginger through a food processor to get a thick paste.

Combine all the ingredients in a large wide bowl, and mix. 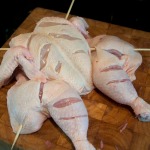 Take your chicken, and make several deep slices into the breast and thigh meat, to help the marinade permeate. Before you start rubbing the marinade into the chicken, it can be useful to set a small bowlful aside for basting onto the chicken during cooking – it’s important to set it aside now, if you’re going to do this, as the rest of the marinade is going to end up mixed with raw chicken juices, and probably shouldn’t be put back on later in the cooking process! 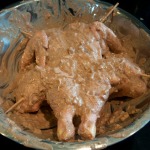 Rub the marinade all over your chicken, top and bottom, and into all the slices, cover, and set aside in the fridge for at least a couple of hours (longer is fine!).

You can either cook this chicken entirely on the BBQ, or do most of the cooking in the oven, and then finish it off over the coals. 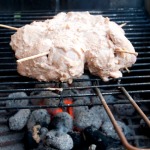 The latter is a great idea if you’re not confident in cooking large items on the BBQ – I would roast it on a rack for about 1hr at 180C before finishing it over the coals. You can check that it’s essentially cooked with a meat thermometer before transferring to the BBQ grill. For a crispy skin, BBQ the ‘inside’ first, and then finish it skin-side down. Dividing the cooking like this is also really handy if you’re cooking for lots of people, as it leaves the BBQ grill free for cooking other items in the meantime! 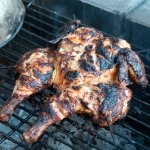 For full BBQ cooking, I like to start skin side down, turn over after about 20 minutes, and then turn back skin-side down to finish. Keep the chicken covered during cooking, with a tent of heavy tin foil or a BBQ lid (if you have one). We have a big old aluminium wok lid which is great for covering things while they cook on the BBQ. Keeping the chicken covered means it cooks much more quickly and evenly. 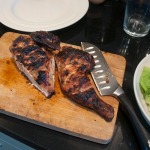 If you’re going to cook this way, do use a meat thermometer to make sure your chicken is properly cooked through – you’re looking for a minimum internal temperature of 75C at the centre of the thickest part of the breast. If you’re at all unsure of your ability to find the thickest part, then shoot for a slightly higher temperature to give you a margin of safety.

Once your chicken is cooked, divide up into portions using a sharp knife – for me, half a breast portion and a thigh or drumstick per person is a nice serving size. Serve with rice and a green salad dressed with a nice mustardy vinaigrette. 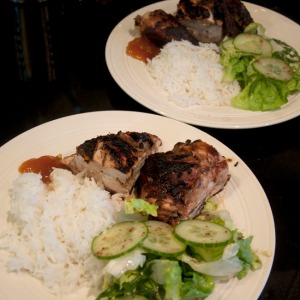 This is a really subtly flavoured, aromatic tikka and will suit those with spice-sensitive tastebuds. If you like yours a bit hotter, use a hot paprika and add a whole finely chopped fresh or dried chilli (or the appropriate amount of dried chilli flakes). 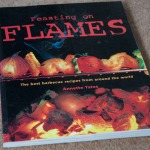 [Full disclosure: This is our book, which we bought. I have received no payment or sponsorship for this post, nor have I accepted a review copy. I do not have an amazon affiliate account and do not profit from any links provided.]

This paperback cookbook pretty much does what it says on the tin, with a good variety of fish, poultry, meat and vegetable dishes, and even some deserts, for cooking on the BBQ. These are accompanied by a collection of side dishes, and some menu suggestions, making this a pretty decent one-stop shop for anyone who wants to extend their BBQ cooking beyond the classic sausage, burger and drumstick fare we’re all so familiar with! 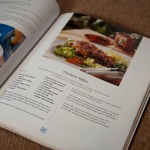 I like the fact that these recipes (like the tikka recipe above) are based on fresh ingredients, rather than taking the short-cuts of using prepared sauces and pastes, but it does mean the ingredient lists end up being quite long. They’re not unusual ingredients, though, on the whole, and should be in most people’s store cupboards. These are pretty quick, simple recipes, which cover a wide range of tastes and cuisines.

Is it a must-have book? No, probably not. It does what you’d expect, pretty competently, without any real ‘standout’ moments. There are, I imagine, many like it. If you get the chance to pick it up cheaply, by all means do, but I probably wouldn’t specifically seek it out. If it’s already on your shelf, and has been a bit neglected, maybe dig it out again and give it another look?