Buoyed up by the success of my first attempt at curing and smoking a very small salmon tail fillet, and tempted by the whole sides of salmon that appear in the shops at this time of year, I thought ‘hey, why not?’ and asked my husband to pick one up when he was shopping.  Having got it home and looked at it, in all it’s 1.75kg glory, and about an inch and a half thick at it’s thickest point, I did wonder if I hadn’t perhaps bitten off a bit more than I could chew…  so like any sensible experimental cook, I put the thought firmly to the back of my mind and got on with it anyway.

Before curing I decided to add a bit of flavour to the fillet in the form of a bit of a whisky infusion, so a tot of Laphroaig went into the bag with the fillet for an hour or two.  In retrospect I should have got the fillet out, washed and dried it and deprived it of its pin bones before doing anything with whisky, as I’m pretty sure that most of the flavour I added got washed away at this slightly later preparation stage.   Lesson learned!

After that, I cut the fillet in half (none of my oven dishes is anything like long enough to take a whole fillet in one go, and my fish kettle is metal and not really suitable for curing) and rubbed it generously with the cure mix which, as last time, is 2/3rds table salt and 1/3rd golden caster sugar.  In aiming for a very short cure period (about 6 hours) I’m keen to make sure the pickle doesn’t become unsaturated, so I use a lot more cure mix than I probably need to in order to get maximum water extraction during the short contact time.  I made up about a pound of cure mix, though I didn’t use it all. 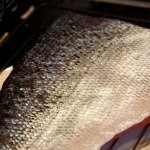 Once rubbed in the cure, with a thin layer in the dish beneath the fish, I covered the fillet pieces with cling film and weighed them down with most of the canned goods in my larder!  I turned them every couple of hours.  At the end of the six hours a really quite striking amount of liquid had been drawn out of the fillet by the osmotic action of the salt and sugar.  More striking than that was the effect of the curing process on the salmon skin, which had reverted from the rather soft pliable texture you expect, to a firm, almost cardboard-like texture with the beautiful blue iridescence you would normally see only in the skin of a freshly caught fish.  More culinary alchemy, and quite beautiful!

After washing and drying, the salmon pieces went into my fridge on open racks overnight.

The next morning, they were part of the second smoker run, and smoked for 10 hours over a mix of oak and apple wood.

After smoking I portionned the fish for freezing, which also gave me a good chance to examine it in cross-section.  The thinner tail piece is perfect, I think.  I cut some slivers from the surface and tasted them fresh from the smoker, it’s some of the best smoked salmon I have ever tasted – a gentle saltiness and sweetness, the oiliness of the fish mixing with a soft smoky flavour and perhaps, with a little faith, even the faint bite of the whisky in the background.  In cross section it is an even translucent orange-pink all the way through and a nice firm texture.

The thicker head-end half of the fillet is not quite such an unmitigated success.  There is a clear visual and textural distinction between the skin 1/3rd of the piece and the rest, with the flesh nearest the skin softer, pinker, and with more distinct fat-lines visible.  In all respects, this part of the fish is much closer in appearance to a fresh fillet than to a cured and smoked one.  I can only assume that the cure mix was not able to penetrate well through the skin (which in retrospect I should have checked was properly scaled) and had not had the time in the cure to be reached from the other side.   It’s not a terrible disaster as these pieces are now frozen and will be perfect to use in dishes like the creamy smoked-salmon pasta, but I don’t think they’re suitable for eating raw.

The options for addressing this, as far as I can tell are –

Watch this space for the third effort – I’m running out of time before Christmas now so the third time had better be the charm!

2 thoughts on “Scaling Up – second attempt at smoked salmon”