No elderflower champagne for me this year (*sob*) but I refuse to miss out completely on the floral bounty of the season. Last year I made a very small experimental batch of elderflower vinegar – just stripped some flowers into a Kilner jar, topped up with cider vinegar, and forgot about it for a couple of weeks before straining it and putting it back into the bottles it came out of. I was delighted with the results, which captured the fresh elderflower fragrance remarkably – even more so, if it’s possible, than cordial or champagne do. It was a tiny batch, so I had very little to share around, but everyone who tried it seemed amazed by it.

So this year, obviously, I had to make a little more. Not as much as I would have liked, because it has to move house with us in a few weeks, but I thought I could just about justify a two litre batch… And then I thought, before diving straight in and just making it up as I went along like last year, I ought to have a look at the cookbooks…

I wasn’t really expecting to find anything, but The Forager’s Kitchen came up trumps – it has some remarkable infused vinegar suggestions, including violet vinegar (which is the recipe that first drew me in to this fabulous little book), so I shouldn’t really have been surprised I guess! Fiona’s elderflower vinegar is a fair bit more sophisticated than my efforts last year, with a double-infusion and the addition of a little lime zest. So here goes!

For a two litre batch, you will require –

Pick 30 your elderflowers on a warm, dry, bright (and ideally sunny!) day.

Shake off any visible insect life, but don’t under any circumstances be tempted to wash them, as you’ll flush away all the beautiful flavour. Now you need to remove the tiny little flowers from the flower heads. Yes, I know it’s a pain, but sit down comfortably, and you’ll be done in about half an hour.

My technique is more like rubbing the flowers between my thumb and fingers than picking individual flowers, and once you’ve got the knack it’s surprising how quickly you can do it. The flowers will probably be crawling with tiny little black insects – if this bothers you, try not to look at them! (We all eat bugs all the time – even veggies and vegans! – you only have to look at the FDA permitted levels of contaminants in food products if you don’t believe me!) 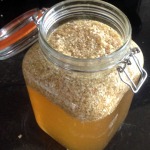 Transfer all your tiny little flowers to a clean sterilised 2l jar, and top up with cider vinegar. Put the caps back on the empty bottles and put them safely to one side, you’ll want them again later.

With a vegetable peeler, peel the lime zest in strips, taking as little of the white pith as you can, and add this, too. Seal up the jar and put it somewhere nice and warm, shaking occasionally, for 10 days.

Don’t waste the rest of your lime, slice it up, and put it in a bag in the freezer. It’ll still go a treat in your gin & tonic! 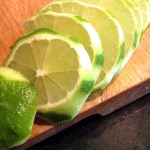 After about ten days, pick yourself 30 more flower heads, remove the flowers as before, strain off the vinegar from the elderflowers and lime zest, and replace them with the freshly picked flowers. I wouldn’t worry about really fine filtering at this stage, a normal sieve ought to be fine. Put the jar back somewhere warm and repeat the occasional shaking for several days.

You’ll see that there’s quite a lot of pollen settled at the bottom of the jar. If you want a really clear vinegar, you’ll want to filter it finely before bottling. I suggest initially straining off the flowers, before passing the vinegar through a fine jelly bag or several layers of muslin. Once filtered, return the vinegar to the bottles it came from. I don’t bother to re-sterilise these, by and large, since they shouldn’t have had a chance to become contaminated since the vinegar was poured out, as long as they’ve been kept capped. Fiona advises using sterilised bottles, though, and she’s probably right!

The vinegar will keep in a cool larder cupboard for at least a year, if you can make it last that long!

[Full disclosure: This is my book, which I bought. I have received no payment or sponsorship for this post, nor have I accepted a review copy. I do not have an amazon affiliate account and do not profit from any links provided.]

This is such an incredibly beautiful book that it’s easy to forget what a great resource it is for wild eating! It covers a huge range of foraging habitats and seasons, hedgerow to coastline.

There are plenty of foraging handbooks out there (I’ve reviewed a couple in the past) – what makes this book remarkable is the quality, inventiveness and sophistication of the recipes, all of which genuinely seem to respect and require the foraged ingredients. There is a freshness and originality about these recipes that I’ve rarely seen elsewhere and which makes me want to make them all, just as soon as I can wrap my grubby little forager’s mitts around the required ingredients!

If you’re at all interested in wild food (with the proviso that it really is UK-focused, and probably progressively less use the further afield you might be) go and buy this gorgeous little book!