We’ve been eating very well this year – with a new dish at least once a week, a wonderful side-effect of this blog series! So it was undoubtedly Dave the dog’s turn.

Today’s recipe is from ‘Doggie Biscuits – healthy homemade treats seasoned with affection’, which we were given a few years ago. Dave can be a fussy little chap, and has some dietary restrictions as a result of his serious illness last year (in particular, his diet has to be very low in fat), but a flick through the book turned up a couple of possible candidate recipes which looked like they should suit him.

I settled on the apple and carrot dumplings, because he loves eating carrots (I know, it’s a little strange!). Whether he’d like them, of course, was anyone’s guess! 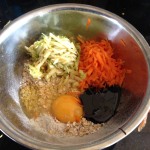 Grate the apple (I left the skin on) and the carrots (well scrubbed or peeled). Then combine all the ingredients and mix well. 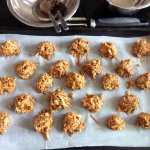 Preheat the oven to 180C. Using a teaspoon, spoon out the mixture onto a lined or non-stick baking sheet. 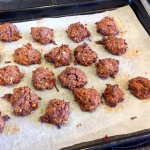 Bake for 30 minutes (turning during cooking if your oven has hot spots). After 30 minutes, turn off the oven but allow the dumplings to cool slowly in the oven. They should come out looking a little like this.

But what will Dave think?

Well, he seems quite pleased with them! (Frankly, I’m delighted he agreed to eat them at all – he’s like that!) They’re quite firm in texture, and seem to take a little bit of chewing, which is good as it adds to the feeding interest. 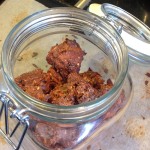 I tried one (well, I had to really, didn’t I?) and what can I say… There’s a good firm texture to the outside, but they retain a little softness in the centre. The dominant flavour is molasses, from the black treacle, but it’s not overhwelming. They’re not sweet, but the molasses prevents them seeming savoury. There’s an oaty back-note and a good chewiness. They’re really not unpleasant – I finished a whole one!

Actually, they remind me of the sort of thing a really ‘right-on’ hippy whole-food parent might feed small children as a healthy snack!

But they’re not for me, and Dave’s verdict is a firm ‘Yes, thank you!’ and who am I to argue?

[Full disclosure: This is my book, which was a gift. I have received no payment or sponsorship for this post, nor have I accepted a review copy. I do not have an amazon affiliate account and do not profit from any links provided.] 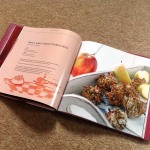 This slightly odd little books contains 30 recipes for dog biscuits of one kind and another (but no cake recipes, despite what the cover image might lead you to believe). From a nutritional point of view they seem pretty sound, and don’t contain anything I would regard as ‘problem’ ingredients – there’s a bit of a fad at the moment for cereal-free dog foods, to my mind it’s just that and not relevant for the vast majority of dogs, but if you’ve been sucked into it, then this isn’t a book for you.

It gives the impression of having been carelessly ‘localised’ for UK publication – several of the recipes call for ‘quark’ for instance (here I was, I thought that was a subatomic particle or a desktop publishing tool – but wikipedia tells me it’s a Germanic sort of cottage cheese). Internet reviews suggest some testing / proofing problems with some of the recipes, too, though I didn’t find a problem with this one. 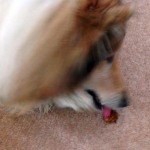 Overall, there are a few cute ideas here but I probably wouldn’t have bought it myself – it may be a novelty cookbook but that doesn’t excuse poor proofing (the recipe for ground beef biscuits, for example, doesn’t appear to contain any ground beef!). Many of the recipes use quite expensive ingredients, too! It’s an interesting concept, but the reality is a little disappointing. I wouldn’t suggest you rush out and buy it.

Dave’s pleased, though, which is what matters, surely?

5 thoughts on “Apple and Carrot Dumplings, from ‘Doggie Biscuits’ by Ingeborg Pils – Cooking the Books, week 10”