Belatedly – since this post should have been written and posted last Thursday. By the time we got to supper time, I was equally short of energy and inspiration, and really didn’t fancy a trip to the shops or a complicated culinary endeavour. Comfort food was definitely the order of the day… So my thoughts turned to pasta bakes, and what could be more traditional than the absolute classic of the genre, the much-loved macaroni and cheese. 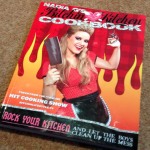 This is one of those dishes which tends a bit towards ‘throw in what you’ve got’ rather than coming from a cookbook, but that would go against the spirit of this blog challenge, so I had a flick though a few of the more likely candidates and found a promising version in the ‘Bitchin Kitchen’ cookbook – of which, more later. It was particularly promising because with a few minor substitutions, I could avoid a trip out in the nasty weather to the Co-op.

Get some well salted water up to a good rolling boil in a saucepan before adding the pasta and parboil it (about five or six minutes ought to do it). Meanwhile pre-heat the oven to 180C. Drain the pasta in a colander, and toss with a splash of oil to prevent sticking.

After giving your pan a quick clean, fry the onion in a little butter until soft and translucent. Add the milk and cream, and the bay leaves, and bring to a gentle simmer. I couldn’t resist adding a little freshly grated nutmeg. Give the mixture a couple of minutes to infuse and then add the grated cheese and stir gently while this melts into the sauce. Give a quick taste and add a good pinch of pepper and a little salt if you think it needs it – with the cheese, it probably won’t.

Now remove the bay leaves from the sauce, add back in the pasta, and mix fully ensuring all the pasta is fully coated. Butter a pie dish or other small baking dish (my trusty enamel pie dish was pressed into service once more) large enough to contain all the pasta. 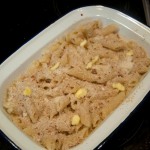 Tip in the pasta and sauce and sprinkle over a generous coating of breadcrumbs. Incidentally, if you’re buying breadcrumbs, for goodness sake stop it, they’re the simplest things ever to make at home and keep incredibly well, and if you’re baking your own bread and ever throwing any away, that’s a tragedy easily avoided!

I couldn’t resist adding a little sprinkle of parmesan to the breadcrumb topping. Dot with a couple of small pieces of butter, and throw it in the pre-heated oven for about 40 minutes.

It should come out looking a little like this!

This is really decent warm comforting winter food, very little effort to make, store cupboard ingredients, but the little additions (the bay leaves, the nutmeg and the nice variety of cheeses) make it that little bit more special. I do like the onion, which I wouldn’t instinctively have added. The top layer of pasta comes out wonderfully crunchy with the breadcrumb topping and the texture of the dish avoids stodginess.

If I had one criticism it would be that the end result is a bit dry – there’s no really indulgent silky sauce to mop up, or extravagant strings of melted cheese.  I suspect incorporating a stringier cheese like a good mozzarella, cut into cubes and sprinkled into the pasta and sauce mixture, and increasing the sauce to pasta ratio, might just upgrade this from a really decent cold weather dish into comfort food heaven!

[Full disclosure: This isn’t my book, it belongs to my husband, but I did buy it for him! I have received no payment or sponsorship for this post, nor have I accepted a review copy. I do not have an amazon affiliate account and do not profit from any links provided.] 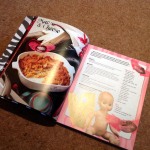 Bitchin’ Kitchen came to TV screens in the UK about a year ago, after starting life as an internet comedy cooking show, and it certainly divides opinions! Personally I love it – it’s totally mad, no question, the sort of batshit-insane TV that only the Canadians seem to be able to make. Is it a serious cookery show? Who the heck knows. But at the end of the evening after a couple of glasses of wine, there’s nothing better on telly.

Now, this isn’t a TV review, really, so let’s turn our attention to the cookbook, which in its way is just as mad. The art design is quite unlike anything I’ve ever seen – I can put my hand on my heart and say that none of my other cookbooks feature images of decapitated dolls, bondage gear, animal prints or stilettos – but the recipes are *good*, and for the most part quite a bit more sophisticated than the mac and cheese featured here. As you would expect there are quite a few modern, Canadian-Italian dishes, but these complimented by a good variety of other influences from around the world. Be aware, this is a US-published book, and while there are weight / volume conversion tables in the back, a set of US cup measures and a willingness to creatively substitute ingredients will serve you well.

I bought this book as a bit of a joke for Hubby’s last birthday, truth be told, but it will definitely be coming out to be used again in the future. If you’ve seen the TV show and hated it, then probably give the book a miss – however good the food, the things that have annoyed you on telly will probably annoy you here too – but if that’s not the case, don’t dismiss this book as merely a novelty item – there’s plenty here to get your teeth into!