I’m blogging from the garden right now, because I’m on hen watch. For the last four hours, my three new hens, and three existing birds, have been free ranging together.  After just over a week of living in adjoining but separate runs, I’m hoping this is the next stage in getting them to co-exist happily as a group of six. 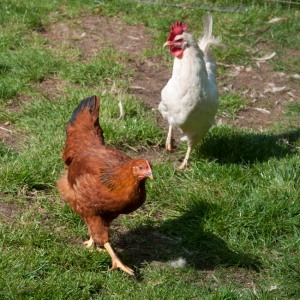 Mixing groups of hens is difficult.  Yes, they look sweet and innocent, don’t they?  But hens’ social structures are complex, and established and enforced by drawing blood (or worse!) if necessary.  That pecking order you’ve heard thrown about as a metaphor?  Well, it’s real.  And nasty.  It’s at times like this that you don’t get to forget than hens really are little dinosaurs at heart.  Genuine pint-sized feathery little T-Rexes.  Next time you get to spend some time watching hens, have a look in their faintly-reptilian eyes and tell me it isn’t so!

Home advantage is a big thing, so I expect the new girls to come off worse, and end up at the bottom of the new pecking order.  It’s more complicated than it might be, though, because Agnes and Doris are adult hens – the same age as Flora from the original trio.  To be honest, I was expecting the whole thing to degenerate into an explosion of swearing and flying feathers as soon as the six were out together.  It didn’t, much to my surprise!

My existing three, as far as I can tell, are ranked with Gertie (the white hen) at the top of the pile, Mabel the Isa Brown in the middle, and speckeldy-grey Flora at the bottom of the stack.  Flora was introduced to the flock last year, and got a bit of a nasty kicking in the process, mostly from Mabel who seemed to declare herself ‘enforcer’.  She still gets the sharp end of Mabel and Gertie’s short temper sometimes, particularly when there’s a tasty morsel or two they don’t want to share. 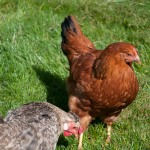 The new girls have established with Agnes, the Welsummer (and biggest of the bunch) at the top, Doris the small but adult Legbar in the middle, and Midge, the New Hampshire Red pullet at the bottom.  Agnes flexes her muscles, on occasion, though things have settled nicely.  Midge and Doris are pretty much inseparable, but Doris does occasionally remind Midge who’s in charge.

What’s really interesting to me at the moment is that Gertie and Agnes seem to have settled on what can only be described as an armed truce.  Neither has taken beak or claw to the other (well, if you ingnore Gertie pitching Agnes out of her favorite dust bath – Gertie is *very* protective of her dust bath), and they’ve been very much in each others strike range without hackles up or much in the way of posturing.  Agnes seems to have yielded subtly – she will give over to Gertie, but only just as much as necessary.  I don’t know what Gertie’s secret is, she just seems to exude natural authority!  It gets odder still.  Agnes seems to have established above Mabel (who runs for cover when she sees Agnes coming) but below Flora (who has a similar effect on the otherwise unflappable Agnes).  No doubt this is going to take some sorting out down the line, since I’m not sure pecking orders permit loops!

Flora is a fascinating character.  I suspect it’s the same cycle of abuse that’s described in humans.  She was the hen who reacted most violently to the arrival of the newcomers last week – lunging at them through the bars and even drawing blood on Agnes’ comb on the first day.  She’s declared herself ‘enforcer’ this time around, and thrown herself into the role with gusto, lunging straight at Agnes the first opportunity she got, landing on her back and really viciously pulling out neck feathers.  I’m not surprised Agnes is afraid of her!

There’s a substantive difference between Flora’s attacks and those of the other bids.  The other hens will peck, will grab and pull feathers, even fly at each other feet first, but generally speaking, just enough to make their point.  Flora’s attacks are really aggressive, no-holds barred, with malice aforethought.  It became clear over the first half hour or so that if left to her own devices, Flora was going to injure one or more of the new birds, possibly seriously, so we decided to catch her and fit her with a bumper bit.

This is a little plastic device which sits with a pair of prongs in the nostrils (a bit like the earpieces of a stethoscope), and has a flat bar across the mouth between the top and bottom beak and a ‘bumper’ type bar which wraps outside the mouth around the front of the beak.  By stopping the upper and lower beak coming together normally, it’s designed to prevent feather and skin pulling, and the ‘roll-bar’ in front of the point of the beak should stop her using this as a sharp weapon!

It’s the first time I’ve used a bit and it wasn’t a decision I made lightly.  While Flora can drink, and eat with the bit in, it does restrict her choices.  She can munch down on pellets and corn just as well as always, but grazing and preening are more difficult. Immediately after it was fitted, she was obviously aware of it and rather unhappy, she rubbed her beak on the floor and scratched at it with her feet.  But she’s settled with it now, and is foraging around the garden normally.

It hasn’t entirely disarmed her (or improved her temper!) – she’s still throwing her weight around – but the damage she’s able to inflict has been greatly reduced, as has the general level of anxiety amongst the other bids.  I’m hoping we can restrict the use of the bit to the shortest period of time we can – ideally a few days to a week or so – though we’ll have to see how the rest of the politics settle down.

Doris and Midge are going to be at the bottom of the new pecking order, but apart from the initial attacks from Flora, and the odd ‘establishment peck’ from the other hens, seem to have been mostly left alone for now.  I’ll be watching these two with particular concern when we house the girls this evening, as they may well get a rougher time when they haven’t got so many options for getting out of the way.

All the hens have been in and out of the open, now combined houses-and-runs.  Gertie seems particularly entranced by the new contraption-house!  We have two feeding stations and three drinkers in place at the moment to reduce unpleasantries associated with competition for resources.  The second house will be staying for now, as an option for any hens who don’t fancy running the gauntlet of the main coop! 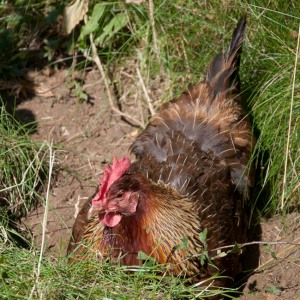 Over all, mostly so far I’m startled by how well things have gone today.  It’s been a huge improvement on the last set of introductions – but then I learned a lot from that experience! I don’t for a minute believe that things will continue to go this smoothly, but it’s a really nice place to be starting from!

3 thoughts on “Clucking Mayhem – chicken introductions, poultry politics and a bit on the side”