A great ham sandwich is one of life’s special pleasures, isn’t it?  A few weeks ago I spotted a big chunk of pork leg on special offer at our local co-op.  It was too much to resist – after all the experimenting with bacon, it was time to add another pork product to the collection.  Time to make a home-cured ham!

I decided to base my cure on a Wiltshire cure, which is a traditional British cure with treacle, juniper and coriander.  The process is a bit more involved and time-consuming than dry cured bacon, but your end result is well worth it!

The weight of the pork isn’t terribly important, as the amount of brine you need is as much dictated by the size of your container, and the curing time is more to do with thickness than total size.  Estimate the amount of curing brine you will require by putting the pork in the box, bucket or bowl and just covering it with water, then take the pork out and measure the water.  I needed just over 3 litres.  This is also washes any liquid or debris from the surface of the pork.

My brine was made in the following proportions – given per litre of cure for simplicity:

Remember you’re aiming for these ingredients to be included *in* a litre of brine, not added to a litre of water, so add the dry ingredients to a measuring jug and then add the water so that you can keep track of the total volumes.  You’ll need to add boiling water to the cure ingredients to help dissolve them, once they’re dissolved top up to your total volume with cold water.

Gently crush the juniper and peppercorns in a pestle and mortar, just enough to crack them open and release the aromas.   Add these and the coriander to the brine and refrigerate until cold.

Once the brine has cooled, add the pork, and weigh it down with the dinner plate so that it doesn’t bob up out of the brine solution.  Loosely cover the box with cling film, and place in the fridge.

Now, once a day, turn the meat over in the brine.  This will help the cure penetrate equally.  Very soon you’ll start to notice the meat and rind darkening as they absorb the treacle, and taking on a firmer texture.

Advice on the subject of curing time appears hugely variable and for my piece of pork I found advice ranging from 5 to 15 days – I’ll come back to this later, but as I wanted the ham for a specific date I took a punt and went for the shortest advised curing time of five days – based on a rule of thumb of 1 day of curing per inch thickness of meat.

After your curing time is up, remove the ham from the brine, rinse it carefully under the tap, dry with kitchen towel and place on an open plate in the fridge.  I rested my ham for just one day, because I was in a hurry to eat it – but I suggest it would be better to rest it for 2 – 3 days before cooking.

It will have completely changed appearance from the pork leg that went into the cure – the meat is a dark mahogany colour and the rind a warm brown.

You can now cook your ham however you like – I prefer to boil mine first, until it reaches an internal temperature of 70 celsius.   I changed the water after the first 20 minutes, this helps reduce the saltiness in the final cooked ham.

Then, I remove the rind, score the fat, glaze with treacle and finish in a hot oven for 20 minutes.  Once the ham has cooled (if you can wait that long!), slice and sample.

The fist thing you’ll notice is that it’s undeniably ham – it has that characteristic pink colour, and gently salty-sweet ham flavour – but what flavour, nothing but the very best traditional ham, this, no added water, none of the strange gristly bits we’re all so used to in commercial re-formed ham.  The treacle flavour is very much to the fore, a bitter-sweet deep note, and the aromatic flavours from the juniper are just about detectable.

What would I do differently next time?  I would have used more juniper, but I didn’t have enough in the cupboard.  I would definitely use fresh coriander if I had some, as this flavour was pretty much lost using the dry herb.  I would also cure for a few more days – maybe seven or eight for this size of pork leg.  Right in the centre of the ham, I found a small patch of meat that hadn’t cured through, and was the grey colour of cooked pork rather than the pink of cooked ham.  A longer curing period would hopefully have avoided this.

I might also have rested the ham for longer, and increasing the resting time might have delt with the evenness-of-cure issue by allowing more time for the cure to balance through the meat without increased curing time, but I wanted to use it to make a ham sandwiches to feed some very good friends the next weekend.  Plain, or with mustard, or pickle, the giant pile of sandwiches went down extremely well! 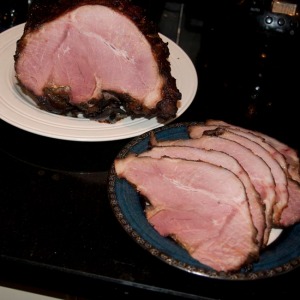 On a slightly different note – the Country Skills Blog is six months, and 50 posts old today!  Thanks to all of you for reading and commenting so kindly, and I hope you continue to enjoy the blog for many more months, years, and posts to come!

5 thoughts on “Hamming It Up – home-cured ham, boiled and glazed”