After two and a half week’s bletting in the spare bedroom, about half the medlars looked unchanged, the other half had softened and darkened in colour, with skins that look and felt a bit like nicely ripened passion fruit. 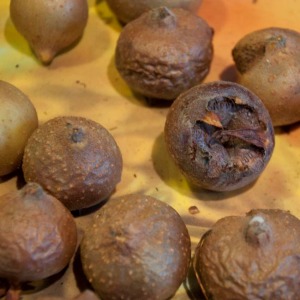 I was itching to get on and, in any case, had read in a couple of places that having some un-bletted medlars in the mix would help with setting the jelly, as they are higher in pectins. Brilliant then – time to get going!

Of course, I had to taste the bletted medlars – I can report they’re a very unattractive mid-brown squishy substance, with a gentle sweet and slightly floral, perfumed flavour.  Not unpleassant but nothing to get really excited about.  One of my medlars had started fermenting, it’s skin was tight with gas and there were bubbles escaping from the calyx (the ‘dog’s bottom’ bit of the fruit).  In the spirit of experimentation (and so you don’t have to!) I did have a little taste of the liquid leaking from this – again not unpleasant, a little more citrussy than the bletted medlar.  I may have to look into medlar wine recipes!  There were also a couple of medlars which were dry and hard and black in the middle.  I threw those ones away.

After consulting a few different sources (many recommended adding apples to the mix – something I wasn’t keen to do as I really want to see what medlars taste like!) I settled on a very simple recipe – medlars, sugar, and just a squeeze of lemon juice into the stewing water, using my almost-all-purpose fruit jelly recipe.

The liquor that drained from the jelly bag nearly had me giving up in disappointment.  It was distinctly cloudy with a rather insipid pale brown colour, a bit like too-weak milky tea.  A quick taste, and it was quite bland apart from a dominant flavour of tannin – like I’d been boiling up dry leaves and bark for an hour.  It almost went down the sink, but since I wasn’t sure what it was meant to taste like, I decided to persevere.

The result is a revelation – dark golden in colour, sweet/acid with a gentle floral top note and a soft tannin base flavour, quite unlike anything else you’ve ever eaten – my husband tried for several minutes to work out what it tasted ‘like’ before giving up on the exercise. The set of my jelly is a bit softer than I would have liked – to my pint and a half of liquor I added a pound of preserving sugar and half a pound of golden caster I had lying around. The jelly had been boiling for well over half an hour at this stage so I suspect the main problem was shortage of pectin from the quite well-bletted medlars.  I don’t think it really matters!