As the smoker build was progressing well, my mind of course turned to what to put in for the first experimental firing along with the piece of bacon I’ve been curing this week.

I’ve never smoked or even cured fish before but there were a couple of tail-piece salmon fillets in the Co-op this afternoon.  Opinions seem to vary incredibly widely on how long one should cure the salmon for (and indeed whether table salt or curing salt are required), whether to dry cure or brine, and then how long a smoke is required (with opinions ranging from 6 to 36 hours!).  Since I planned to run the smoker the next morning, and the fillet is small and thin (and has also been robbed of it’s skin – something I didn’t notice when I bought it) I went for the lowest of all the estimations, and the simplest of approaches.

Rub the cure generously into both sides of the fish with some extra under the fillet.  Then weigh the fillet down with a plate and a can of tomatoes to encourage the water to come out of it.  Leave the fillet like this in the fridge for six hours.

After six hours the fillet should be flatter, firmer, darker in colour and lighter in weight.  The photograph is the same fillet as above.  After six hours of curing there was lots of salt still left in the bowl, along with quite a bit of pickle (the liquid which has oozed out of the fish).  The fillet, rinsed and dried weighed 111g, a 14g weight loss in water in six hours.

Now put the fish, uncovered, on a rack in the fridge overnight.  In the morning it will have formed a shiny pellicle, and lost a bit more weight (mine was 109g by this time).  Time now to load my home-built cold smoker for it’s maiden voyage… 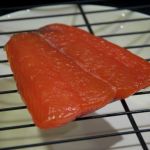 After ten hours of cold oak smoke, the fillet is 106g (a 19g total weight loss which is about 16% – not far off the 17-18% I’ve seen recommended).  It has a glossy, slightly oily surface, a firm texture, and smells more of smoke than it does of fish.    I would describe it as ‘lightly smoked’, for reasons I’ll discuss further in the write-up of the first (rather experimental!) burn in the smoker.  Because I don’t know enough about the storage conditions of the fillet before I bought it, I plan to cook with it instead of eating it raw – probably tomorrow night. Expect a post-sampling update!