Hurray! I’ve rescued the pictures from the faulty memory card, so we can skip back and catch up with The Missing Episode!

This is rather a neat little recipe, which makes a great quick supper. It’s full of flavour, quick, fresh, and (whisper it) healthy.

To serve two, you will require –

A quick note on chicken, first – if you buy chicken portions from the supermarket, stop it right now. Dividing a whole chicken into portions is so easy, with a little practice it can be done in a minute or two. You will save money, and get better portions (the chicken breast portions you buy are woefully under-sized and over-priced compared with buying a whole roasting chicken), and also not be participating in the stupidity that sees the UK import white chicken meat from places like Thailand and Vietnam, while at the same time we’re net exporters of chicken leg meat. Madness. Right, rant over, and on with the recipe! 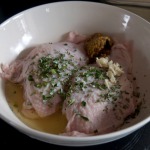 In a bowl, coat the chicken breasts with the mustard, rosemary, crushed garlic, a pinch of pepper, a squeeze of lemon juice, and a little glug of olive oil, and set aside to marinade for half an hour or so, if you have the time – don’t worry if you’re in a rush, though, you can go ahead and cook straight away. I had two wings from my portioned whole chicken, so I put those in, too.

The recipe calls for cooking the chicken on the BBQ (it’s an Australian recipe, after all), but for UK convenience, on a slightly drizzly evening, I chose to roast it in the oven. Preheat your oven to 180C. In a roasting tin or tray, arrange your chicken pieces. Once the oven is up to temperature, slide in the chicken, and roast for 35 – 40 minutes.

After about 10 minutes, cut your potatoes into bite-sized pieces (or use small new or salad-type potatoes, which you might just want to halve) and boil until tender. Drain, and mix in a good dollop of butter. Your potatoes can wait now with a lid on until the chicken is ready, which shouldn’t be long.

Once the chicken is done, remove from the oven, and rest, covered loosely with foil. Pop the buttered potatoes back on the hob, and add the spinach to the pan with a tiny splash of boiling water. It will look like far too much spinach, but don’t worry, it will wilt down quite dramatically. Shake & mix the veggies from time to time, with the lid on, until the spinach is all wilted down. Season with plenty of black pepper, and a little salt to taste.

That’s it, it’s ready to serve, with a slice of lemon on the side. 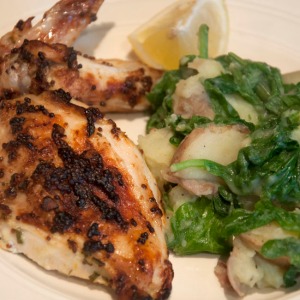 There are some peculiar features to this recipe. Presumably they can be explained by the whim of the publisher, which is The Australian Women’s Weekly. I’m the last person to over-season with salt – I find it quite intrusive, if done to ‘cheffy’ levels – but the recipe mentions seasoning nowhere, and if you skip the black pepper, particularly, I think the flavours will be the weaker for it. I presume there’s a salt-avoidance rationale behind it somewhere. Likewise the recipe expects skinless breast fillets, which is bound to be down to fat-reducing, but compromises on flavour and texture for me. Make up your own mind!

The combination of mustard and rosemary flavours works really well – I say this as someone who is not historically a great fan of mustard as a dominant flavour – and the chicken does go very well with the potato and spinach side dish. It was quick and simple to prepare but the flavours are big, fresh, and quite bold without being overpowering or unbalanced. This is healthy everyday food that doesn’t set off ‘diet food’ alarm bells. I recommend you try it!

[Full disclosure: This is my book. I have received no payment or sponsorship for this post, nor have I accepted a review copy. I do not have an amazon affiliate account and do not profit from any links provided.]

This is an odd little book, and one of a series. I can’t rightly remember how it came into my possession, whether it was a gift or a bargain bin purchase, but unlike many ‘collection’ books, it’s rather better than you might expect from the outside! 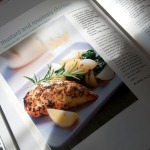 As you might suspect from an Australian mass-market recipe collection around the turn of the millenium, it’s quite heavy on asian-influenced dishes without requiring a larder full of specialist ethnic ingredients; this makes it refreshinly easy to shop for in our local village Co-op! The food is light, fresh, and very suitable for summer eating. There are a variety of BBQ dishes which I will definitely return to during the course of the summer.

The lack of seasoning follows through all the recipes, and can only have been an editorial decision. Fat and kJ values are given for the recipes, but the collection doesn’t appear to have been selected on this basis, which is refreshing! All in all, it’s a nice surprise, then. Better than expected. I wouldn’t suggest you all dash out and buy it, but if it happens to be hanging out on your bookshelf, perhaps give it another look?