The blog seems to have been very heavy on recipes since the new year – mostly because all I’ve managed to write most weeks is the Cooking the Books post (and, you know, not always that!). There’s a lot going on in our lives at the moment that I’m not really free to talk about just yet, but which has completely put a stop to the gardening I would normally be stuck into by this time of year (my window ledges are entirely bereft of their usual forest of seedlings, and sitting on my green fingers is such torture!). But this was never intended to be just a food blog, and, of course, life goes on.

Now, I’m sure you all know about Sugru by now – I waxed enthusiastic about it to my little sister last summer, only to discover she’d been an early convert (but had somehow neglected to mention the wonderful stuff to me?!), so I know I’m late to the party. But just in case you haven’t come across it, let me tell you a little bit about this wonderful stuff. Sugru is a mouldable putty, rather like play dough or blue tack. It comes out of a little sealed packet, and then you have 30 minutes to play with it before it starts to set. The Sugru then cures, in the air, at room temperature, in the next 24 hours (longer if it’s a particularly big piece), after which it is set permanently, with a silicone-rubber character.

So, what? Relatively slowly setting modeling clay doesn’t seem so exciting perhaps… Well, it bonds permanently to a very wide range of underlying materials (plastics, glass, metals, ceramics, fabrics, wood and so on), and will tolerate a wide range of temperatures from -50C to +180C, as well as being flexible, waterproof, electrically insulating… You get the idea, it’s clever stuff! [Full details on the Sugru website, here.]

Back in the summer, I used my first pack to finish my denim strap replacement up-cycle on a pair of flip flops. They held up extremely well to the wear and tear they were put through in the course of what was an unusually hot summer. I’m looking forward to wearing them again this year. 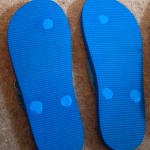 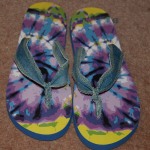 Some of the leftover from the pack, I used to mend and re-attach a cracked knob on our cooker. That repair has held up so well – and is so ‘seamless’ – that until I started writing this little post, I’d almost forgotten I’d ever mended it in the first place! 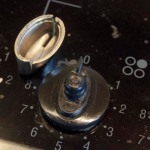 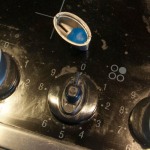 A few months ago, now, I noticed that our kettle had started leaking, apparently from the join between the metal body and a plastic viewing window set into it. We have very hard water here, so I suspect limescale got established in a little gap and slowly pushed it apart. For a while, it was just the odd drop or two when I boiled a big kettle of water, but then one day, at the end of January, there was rather a big puddle of rather hot water on the kitchen counter after I’d boiled the kettle. Obviously water and electrics are a great mix! I nearly chucked the kettle in the bin and went to buy a new one, but I do hate to throw things away that might still have some life in them – and after all, the kettle still ‘worked’… Then I remembered the Sugru, hiding in the fridge (refrigeration extends the shelf life of the product before use).

It seemed too good not to try – I mean, the worst that could happen was still the kettle ending up in the bin anyway. This is one of the reasons I love mending things so much – you can justify all manner of experimentation that you might hesitate to try on a working item for fear of breaking it. My plan was really quite simple – to make a Sugru gasket or seal for the plastic window, by pushing it into the gap all around the outside, and then the water wouldn’t be able to get out any more. So far, so obvious, right? I shared my plan with Hubby, who looked a little unconvinced and told me ‘not to make it look rubbish’ – well, there’s nothing like a vote of confidence from your nearest and dearest…

Now, the surface preparation instructions that come with the Sugru are very simple – they boil down to ‘make sure the surfaces you want the Sugru to bond to are clean and dry’. I admit, I didn’t do this carefully enough. I’d given the kettle a really good wash to remove any grease, and removed as much of the limescale as I could using vinegar. I gave it all a good dry with a tea towel but didn’t really think that there would probably be some residual water (and probably detergent) in the gap I was planning to seal. It turns out soapy water acts as a release agent for uncured Sugru. You have been warned!

The process was simple enough – roll out little lengths of Sugru, and stuff them into the gap. Then smooth off the surface (to avoid it ‘looking rubbish’). Problem being that around the lower left part of the window, the Sugru refused to adhere and kept falling out again. This was particularly vexing as I’m pretty sure this is where the worst of the leak was coming from! Eventually I gave up and peeled the Sugru away everywhere it wasn’t sticking, tidying up the edges with a putty knife, and left the rest to cure for 24 hours.

Fortunately, I had a second pack of red Sugru in my stash, or it would have been a funny multicoloured fix that might have upset Hubby’s ‘rubbishometer’!

On day two, with my second pack, I was able to complete the seal all the way around, without any obvious difficulty. I left it to cure for another 24 hours, and then couldn’t wait to test my repair.

Well, it works. You can see from the photo just below, taken a day or two ago – almost two months after the repair – there is a little bit of limescale visible in a couple of places around the repair. It does still leak *very* slightly – the odd drop of water manages to sneak through while the kettle is boiling energetically, and evaporates on the spot, so for my money, the repair is a success – no more water on the worktop! I’m pretty sure that if I’d waited for the kettle to be really dry (and, lesson learnt, I won’t make that mistake again!) then the repair would have been completely successful.

Will the leak get worse as time goes by? I don’t know yet – it may be that the limescale will continue to do its thing and will slowly push the gap wider. Then again, because the Sugru stays flexible after curing, it may be able to accomodate this without additional leakage. Anyway, in the meantime hopefully I will have worked out what replacement kettle might look best in my new kitchen…

And think, if only he had some Sugru, Henry could have fixed his bucket – mind you, I’ve never worked out how the straw was going to help – can any of you shed any light on the matter?

4 thoughts on “There’s A Hole In My Kettle, Dear Liza… Well, fix it with Sugru!”